Skip to content
Home > Uncategorized > The law and the gospel…
Published September 25, 2020 by Dan Carlson

The law and the gospel…

*NOTE: The following is an article that was originally published on the website of the Minneapolis Area Synod (MAS) of the Evangelical Lutheran Church in America (ELCA). If you would like to read the story in its original context, please click here. It was published just a few days ago, but it has given our ministry more public exposure, and positive feedback, than we have received in many years. I want to thank the author, Nick Tangen, for taking the time to get to know me and the work of our ministry, and for sharing that information with accuracy and compassion. I also want to thank Bob Hulteen, Communications Director for the MAS, for his work getting the story published and well circulated!

The law and the gospel 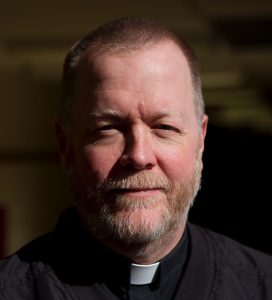 Pastor Dan Carlson has been ministering to public safety professionals for his entire career. He spent 20 years as a police officer and police chief in Eden Prairie, Minnesota, and so knows intimately the struggles and unique pastoral concerns of those who work in public safety: police officers, fire fighters, and emergency medical technicians (EMTs).

“I tell people my job is to care about people until I have the opportunity to care for them,” said Pastor Carlson. “I live by one commandment – love God, love your neighbor as yourself – so I go with that.”

“Pastor Carlson describes the challenges of ministering to a population of professionals who deal with trauma and violence on a daily basis and the closed culture that develops in that setting.”

Pastor Carlson’s experience as a police officer showed him that there was a lack of faith-based presence in the public safety professions. This need inspired him to enter seminary and follow his call to be a Minister of Word and Sacrament.

“I thought, you know, these people need spiritual help,” said Pastor Carlson. “My mission is to provide spiritual health and wellness to police officers. Over the years I have worked intimately with hundreds of agencies, often in times of crisis.”

IN 2019, PASTOR Carlson applied for a Ministry Imagination Grant focused on developing resources and a public platform to preach to and teach public safety professionals about spiritual wellness and spiritual practice.

“I always tell people, everyday these cops deal with marital disputes, chemical abuse problems, sexual abuse, theft, … and they also deal with it on the job,” said Pastor Carlson. “The vast majority of the time I deal with cops, it’s personal life stuff. And if it is the job stuff, the big impact of their work is on their personal life.”

Pastor Carlson describes the challenges of ministering to a population of professionals who deal with trauma and violence on a daily basis, and the closed culture that develops in that setting, which can often leave public safety officers feeling disconnected or unwelcome in faith communities.

“I always tell people, everyday these cops deal with marital disputes, chemical abuse problems, sexual abuse, theft, … and they also deal with it on the job.”

“I had a call two nights ago from someone who works in a police department looking for someone to perform a wedding,” said Pastor Carlson. “They don’t want a judge to do it, but they also don’t want a pastor to do it who doesn’t understand our culture.”

This disconnect between public safety officers and faith communities is widespread, and Pastor Carlson has made it his mission to connect police officers, fire fighters, and Emergency Medical Services (EMS) professionals to communities where they can practice their faith and find fellowship.

“Cops are very faithful people; life is sacred to them. That’s why they’re doing this,” said Pastor Carlson. “And they don’t realize it until I say, ‘You’re answering a call to serve those who can’t serve themselves.’ They are very spiritual, but they might be heavily disconnected from God.”

THE MINISTRY IMAGINATION GRANT that Pastor Carlson applied for calls for the creation of a faith practice curriculum, including five essential practices that he has gathered from clergy colleagues who have supported him. The practices are Study, Prayer, Gathering, Service, and Friendship. 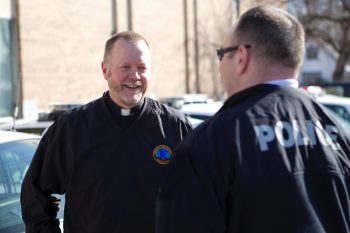 Pastor Dan Carlson applied for and received a Ministry Imagination Grant to provide resources on spiritual wellness for law enforcement professionals and for training in hospitality for congregations in order to welcome those professionals.

“The way I define friendship is … two or three gathered in God’s name, sharing God’s story, and seeing how we can make society be better,” said Pastor Carlson. “The government’s job is to fix the streets and police the roads. A hospital’s job is to heal people. And a faith community’s job is to bring grace and faith and peace, a healthy spirit into people’s lives.”

These five spiritual practices form the content and focus of Pastor Carlson’s curriculum, which he plans to share on his blog and through a podcast called “Radio Life Hike.” He sees this digital platform as his pulpit, from which he can preach the gospel through his unique perspective as a law enforcement officer and long-time minister to public safety officers.

In recent years, Pastor Carlson noticed that it was not only that public safety officers felt disconnected from faith communities, but that faith communities also did not know how to welcome and minister to them.

“I was planning on training cops and fire fighters and medics, to give them the tools to engage with a church,” said Pastor Carlson. ”What I discovered is that churches don’t necessarily want to make cops welcome. It’s really challenging. Because they are the ‘bad guys.’ They’re the ones killing people and, if you’re in a white community, there’s some embarrassment about that, because they are you. They are doing the job you asked them to do.”

FOLLOWING THE MURDER OF George Floyd and the public outcry, Pastor Carlson noticed this divide and this challenge for churches to be welcoming and compassionate to public safety officers expand significantly.

“Society and churches really don’t want to see behind the curtain about what law enforcement really is,” said Pastor Carlson. “And they passively neglect us, because they don’t want to hear that stuff. … So I realized that I had to rewrite my [curriculum] not to direct it at cops, not teaching cops to engage this welcoming church. Because they aren’t welcoming. I mean maybe if we follow the rules and become anti-police. I had to direct it to churches instead.”

Through his web presence and his continued engagement with public safety officers, Pastor Carlson hopes to continue to break down the divisions between law enforcement and the church, and to create an environment of compassion and welcome. “If there is one value or practice of faith that goes with how we serve, it’s compassion,” said Pastor Carlson. “If everyone could do one thing – have compassion. Compassion is a strong desire to end people’s suffering.”

“In 2019, Pastor Carlson applied for a Ministry Imagination Grant focused on developing resources and a public platform to preach to and teach public safety professionals about spiritual wellness and spiritual practice.”

Pastor Carlson has been working with Mount Calvary Lutheran Church in Excelsior, the sponsoring congregation for the Ministry Imagination Grant, and hopes that in the future more churches may consider taking on this important work. “I would like to begin embedding more in the churches,” said Pastor Carlson. “And at Mount Calvary, they’re all in. And I want to know if we can build a bridge between the faith communities in Excelsior and the public safety offices.”

The Ministry Imagination Grant has given Pastor Carlson the resources needed to build a meaningful curriculum focused on spiritual practice, and the tools for distribution through his blog and podcast. He will continue to serve as a minister to law enforcement officers, fire fighters, and EMS professionals. He hopes to build bridges between them and local faith communities, so that all might experience the gracious invitation into Christian community.